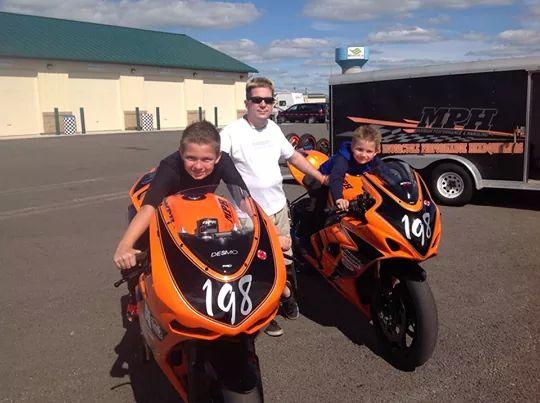 Doug Duane, the owner of our company MPH, has more than 35 years of experience in the racing and recreational vehicle industry. He is a retired racer and team owner at the  AMA (American Motorcyclist Association) Superbike level team. In addition, he has earned more than 46 various Road Racing Championships. These include pro, national, regional, and endurance levels. In 2001, he was named the AMA Pro Racing Horizon Award winner.

Apart from participating in racing, he has partnered in a road racing series and offers private coach for Road Racing School Instruction,  has an Associate of Applied Science degree in Computer and Informational Systems Management. This is made apparent with his accomplishments as an engine builder, an accomplished dyno tuner, and a chassis technician. He has completed many new product updates and tech qualifications for various bike models, such as Suzuki, Honda, Yamaha, Kawasaki, Victory and Harley-Davidson to name a few. Doug also specializes in welding, fabrication, and painting.

Articles About Our Owner 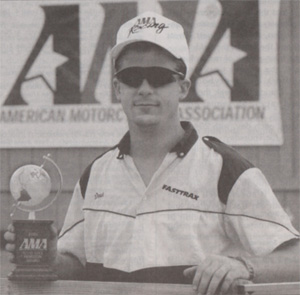 Doug Duane had an outstanding two days of racing in the AMA Grand Championships held on the 2.4-mile Mid-Ohio Sports Car Course, winning five races overall including three of the premier classes. For his strong performance, Duane was named the 2001 Horizon Award winner for road racing. Duane, of Stow, Ohio, started off the two-day event with victories Monday in the GT1 and Superbike 750. Tuesday, he entered five of the six premier races. He eventually ran four of the races, electing to sit out the final race of the day due to fatigue and earned a total of three victories on the day. Duane rode a trio of Fasttrax-sponsored Suzukis. 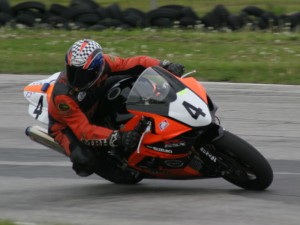 Duane follows in some pretty big footsteps. Riders such as Jason DiSalvo,Ben Spies, and Nicky Hayden are previous winners of the Horizon Award, which recognizes the nation’s top up and coming amateur racers who are about to turn professional.

The Best of the Best 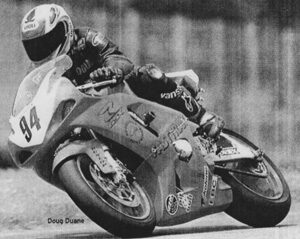 What does it take to go fast among America’s Best amateur road-racers?

Talent’s not a bad start. Confidence certainly helps, too. How about motivation, smarts and skill?

The fast guys filter to the top pretty quickly, meaning that the short list for the Horizon Award is well-established in the first few races.

Doug Duane, a 28-year-old from Stow, Ohio, looks strong. But true to form, he’s got a pack of racers chasing him.

For Duane, who races in the Grand Championships at this same track last year, the Horizon Award is the honor he’s striving for.

“That’s the goal,” Duane says. “That was my focus last year and it is again this year.”

In the first race of the day-Heavy-weight Superbike-Duane jumps to an early lead aboard his Suzuki GSXR750 and runs away with the 10-lap race, finishing 24 seconds ahead of second place finisher Jon Glaefke of Boulder, Colorado, abroad a Suzuki GSXR1000.

Duane then faces off against Pate and Green in the Middleweight Grand Prix class. Midway through, it’s a tight pack, with Pate holding a bike-length lead aboard his Kawasaki ZX-6 ahead of Duane, on his Suzuki GSXR600. Green’s Yamaha R6 trails Duane by less than a bike length in third.

That’s two premier racers down, and two different winners–Duane and Green. But there are still four races to go.

In the next race, Unlimited Superbike Duane once again dominates the big-bike field, winning by 27 seconds. Impressive.

But then Duane and Green square off again in the next race-Heavyweight Supersport-with Duane aboard his GSXR750 and Green on his 600 Yamaha.

The two bikes battle almost nose to tail for much of the race, with Duane winning by just over a second. Duane turns the fastest lap of the race, 1 minute, 34.883 seconds, on his final circuit.

“Early on, I caught myself worrying about what was behind me,” Duane says. “I lost focus and wasn’t hitting my marks. About the third or fourth lap, I just put my head down. I saw him (Green) once on the inside in turn one. He pushed a wheel in, but I just stayed on the power and that was about it.”

In the end, the 2001 Road Race Horizon Award is presented to Doug Duane.

“Winning this means a lot,” he says. “First, it’s the compliment. And second, it will hopefully make people aware of what we’re doing. Maybe we’ll get better equipment and pull in some sponsorship.

Just days later, Duane races in the pro ranks at the AMA Chevy Trucks U.S. Superbike Championships at Mid-Ohio, beginning a new journey to try to become the best of the best.

We Are Your #1 Choice in Building Custom Maps

We Are Your #1 Choice in Service and Maintenance

We Are Your #1 Choice in Performance Upgrades

We Are Your #1 Choice in Custom Builds

We Are Your #1 Choice in Chassis / Suspension / Geometry